They're right in front of you, but sometimes it's too late to see them.

Sorry man, I've been working overtime at my job to make up for all the lost time and I... kinda forgot about everything for a little bit. Anyways, I remembered that I promised pictures. Unfortunately, all I got was the paper that fell out, but it scared me pretty damn badly. I've never seen any symbol like the one on here. It kinda looks like the Operator symbol, but hell, I dunno... 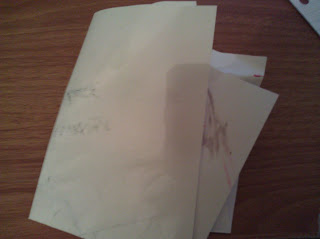 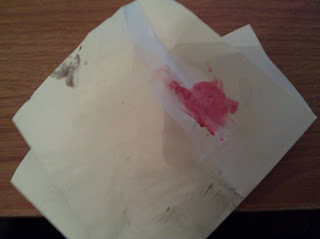 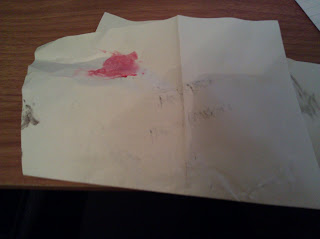 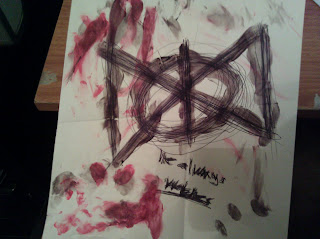 chriss got worse. a lot worse. like, homicidally insane and shit. he got himself locked up, doped up, all sorts of shit. matt and i finally just got him back. we took him off the meds. he's getting better. i also got the journal. his journal, the one he was scribbling in furiously. i asked him about it, he has no idea about it, i haven't told him i found it. upload pictures later, in a hurry right now. matt's been in and out lately. he's been gone for two days now. he stays and goes, whatever, he'll be back soon.

pictures later.
Posted by Ryan Wayne at 6:40 PM No comments:

oh my god i cant even fucking begin to explain the hell ive been through the last month fuck ill try and get a post up tomorrow explaing all this shit goddamnit im so fucking tired why am i even still alive why cant he just fucking kill me already i want out of this shit
Posted by Ryan Wayne at 9:06 PM No comments:

What the hell's been going on?

Jesus Christ, it's the 16th already? Ugh. Thankfully this wasn't one of those "HOLY SHIT WHERE THE FUCK HAVE I BEEN FOR THE PAST X AMOUNT OF DAYS" moments. I just got all caught up in what was going on, trying to get info out of a barely-there Chriss, dealing with Matt losing his shit about me knowing something he doesn't, yadda yadda yadda. Plus, Monday was Valentines Day. Fucking worst holiday of the year. And yes, through all this I kept my job at the cafe. So work's been keepin' me kinda busy.

Anyways, I finally got Chriss in a semi-coherent state today. He's pretty fucked up - physically and mentally. Looks like he got beat to shit by a monster truck and then dragged across a battle field. He suffered a pretty bad blow to the temple, obvious by the super enormous fucking bruise, but when we took him to the hospital and they did a scan, there was no serious brain injury. He might suffer slight amnesia and they got him doped up on a lot of meds so that does not help AT FUCKING ALL. So, our conversation today, it went something like this:

Me: Hey Chriss, do you remember what the hell happened to you?

Chriss: There was a man... standing outside. -incoherent rambling and shuffling of the sheets as he looks around nervously- Tall, suit, bald...

Me: You know who this dude was?

Chriss: -shakes head and mutters something about not wanting to say it-

Me: The name can't hurt you. What letter does it start with?

At that point he screamed at me not to say the name but was too weak to actually jump me for it, so he settled on pathetically glaring at me and scooting away, mumbling.

A knock on the door made us both jump and Chriss screamed bloody murder. Matt charged in asking what the fuck was going on. That's when he lost it and yelled at me about knowing something about Chriss and what happened to him. I decided I'd wait till later, until it was necessary, to fill him in. He calmed down after a while and left somewhere. (No idea where, but he's been gone since five. Not that worried, though, because he's the type of guy to dissapear for a few days and pop back up.)

Anyways, after Matt left, I went back to Chriss only to see him writing something in a notebook. As soon as he saw me, he slammed it shut and refused to give it to me. He had the crazed look in his eyes that made my heart skip a beat. Even doped up on meds, this is not how Chriss would be. He's always been the rational type, a quick thinker, all A's in school. Whatever got him musta fucked him up good. I'm kinda scared. I'll try and get my hands on that damn notebook, one way or another. Chriss'll pass out eventually. I gotta get to it now, since Matt ain't here we got no cook, so I gotta hobble my ass out into the kitchen and make Chriss and I some damn food.

I also realized I never posted the rest of Dahlia and I's story... I'll admit, I've been avoiding it. I'm scared of bringing up the past. And now that Dahlia's gone... Fuck, man.

Well, better get to it.
Posted by Ryan Wayne at 5:35 PM No comments:

We found Chriss. We were running out of food, and Matt (who's been staying here while we look for Chriss) went to get some. Guess who was lying at our fucking doorstep? Yep, Chriss himself. Matt dragged him inside and we brought him back to consciousness. He couldn't remember a damn thing, though. Typical. That bastard was standing across the street, but Matt didn't see him. However, I think Chriss has been aware of Slenderman like me. I'm gonna talk to him about it later.
Posted by Ryan Wayne at 6:44 PM 1 comment:

Okay, I... I lied. After seeing the code that popped up in my last post and J asking what I meant, I figured I should tell you all what happened... Chriss went missing about a week ago. Matt and I have been spending the last week looking for him, although he's been doing more of the footwork, considering, y'know, broken fucking ankle. Anyways, I didn't want to bring this up because I wasn't sure it was connected to Him, but now... It could very well be.
Posted by Ryan Wayne at 6:27 PM No comments: